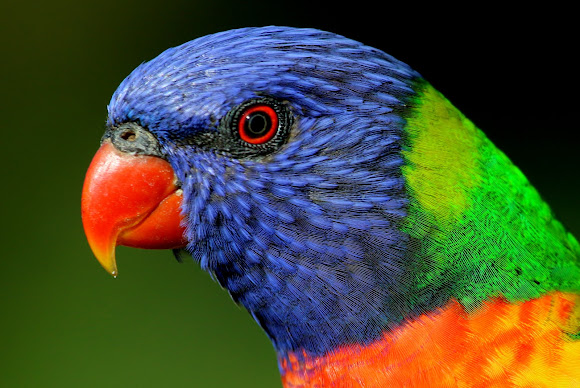 The Rainbow Lorikeet is unmistakable with its bright red beak and colourful plumage. Both sexes look alike, with a blue (mauve) head and belly, green wings, tail and back, and an orange/yellow breast. They are often seen in loud and fast-moving flocks, or in communal roosts at dusk.

Feeding: The Rainbow Lorikeet mostly forages on the flowers of shrubs or trees to harvest nectar and pollen, but also eats fruits, seeds and some insects. Breeding: The eggs of the Rainbow Lorikeet are laid on chewed, decayed wood, usually in a hollow limb of a eucalypt tree. Both sexes prepare the nest cavity and feed the young, but only the female incubates the eggs.

What a great image Mark. Fantastic.