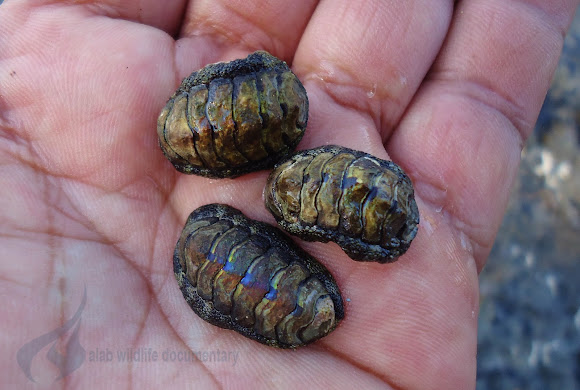 CHITON -Trilobite Imposters Chitons are relatively common, though largely unnoticed occupants of the intertidal zone on most of the world's shores. They are also sometimes known as sea cradles or "coat-of-mail shells", or more formally as loricates, polyplacophorans, and occasionally as polyplacophores.Their distinctive feature is a shell composed of separate armored plates, which on first glance, strongly suggest the repeated segments of an arthropod, such as a trilobite. They can range from dull browns, greys, and green and are very attractive, bright colors . Examining the underside of a chiton would revel a broad, muscular snail's foot, not the numerous, jointed walking legs of an arthropod. So, although a chiton might at first resemble an eyeless nileid trilobite, it would soon be revealed as a mollusk on closer examination.