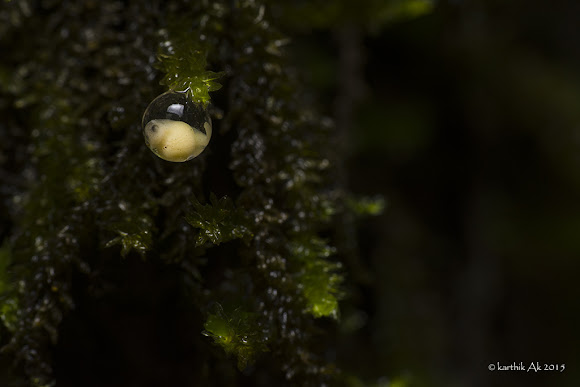 Hanging for life!! Last week Vipin and I were exploring one of the places rich in bio diversity in the Western Ghats - Amboli. There is so much life and action on macro scale. It is very delicate ecosystem. One of the wettest places i have ever been!! In monsoons, it rains heavily, when not the atmosphere is filled with fog. The visibility on a mid-day will be just around 10 feet, forget the night time. Sometimes it will be drizzling all the while or sometimes you can see fog and rain together!You can never see a dry patch anywhere in Amboli during the monsoon!! It was around 4 in the evening while exploring, we came across this spawn of eggs. The eggs were on bark of a tree with thick moss grown on them. They were not under any pond/stream or anywhere close to them. The eggs were already in advance stage of development. They had developed tiny little limbs, a tail,the eyes were prominent, the veins were visible in few of the eggs. Probably, the eggs would have hatched as frog-lets in couple of days. The placement of these precious eggs is so fascinating. The frogs choose to lay the eggs on bark of trees with thick moss. We came across many such spawns later. All except one was laid above 5 feet. The spawn that was lower was well hidden. One cannot get to see the eggs just by skimming the bark of the trees, you need to observe!! After spending some time with the eggs we decided to come back at night to try our luck to find out to which species the eggs belonged to!! The absence of rains was a disappointment! We saw many male Minervarya sahyadris frogs calling from trees with thick moss on them. We also saw couple of females close by. We planned to observe the entire behavior, but the females decided to head the other way.The lack of rains might be the reason. We came back the next day to check out the trees for any fresh eggs but there were none. This one egg was separate from the spawn, but still it is hanging for life. The struggle for survival of this individual has been started even before it is born. Hope this egg survives and hatch successfully!