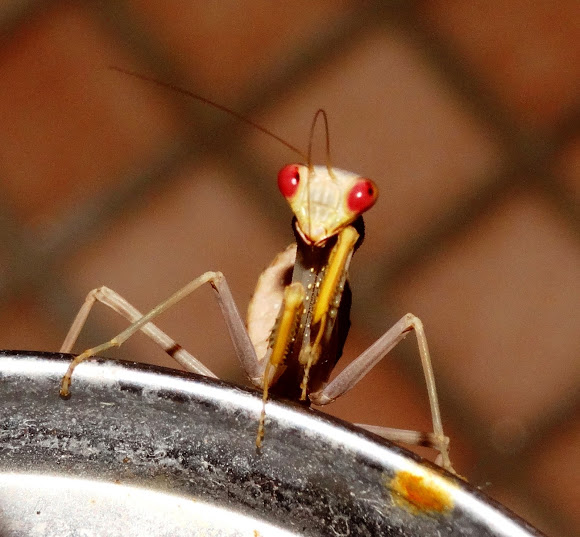 A male African Mantis. Despite its scientific name (viridis is Latin for green) this insect ranges in color from bright green to dull brown. Females can reach 10 cm (3.9 in) in length. Sexual dimorphism is typical of mantises; the male is much smaller. Females may also be distinguished from males as they have a six-segmented abdomen compared to an eight-segmented abdomen of the male.

S. viridis is native to West Africa south of the Sahara Desert. It can also be found as an introduced species in areas outside its original range, including Israel, Greece and Spain.

Spotted in the bathroom of a house at Sykies (Thessaloniki) near the suburban forest Seih-Sou.

Probably a Sphodromantis viridis (those are in Greece now).

Thanks again ForestDragon. I think that I haven't the knowledge and the resources to id this mantid.

I wonder if this is a Mediterranean Mantis, Iris oratoria, nymph. https://en.wikipedia.org/wiki/Iris_orato...

I am having a difficult time finding a good resource for Greek mantids. Perhaps you have some resources in your area that can help.

ForestDragon thank you for your comment. My opinion was that is a juvenile European Mantis. I would appreciate any other suggestion.

Beautiful mantis! I believe this is a different species than a European Mantis. The body shape an markings are not consistent with M. religiosa. I need to do a bit more research to find out which species are found in your area.

Here are a couple of links for the European Mantis for comparison: https://en.wikipedia.org/wiki/European_m...
http://bugguide.net/node/view/22947