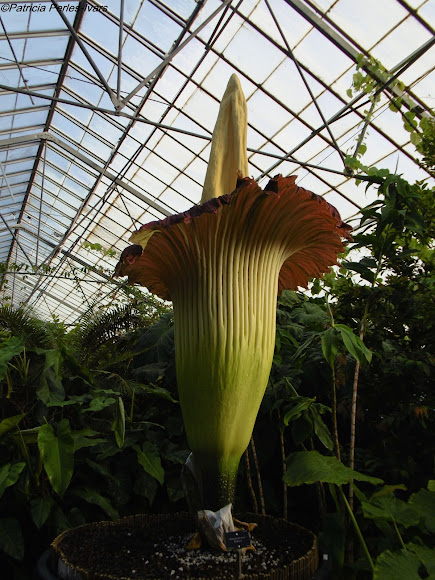 Flowering at the Royal Botanic Garden of Edinburgh The titan arum's inflorescence can reach over 3 metres (10 ft) in height. Like the related cuckoo pint and calla lily, it consists of a fragrant spadix of flowers wrapped by a spathe, which looks like a large petal. In the case of the titan arum, the spathe is a deep green on the outside and dark burgundy red on the inside, with a deeply furrowed texture. The spadix is hollow and resembles a large loaf of French bread. Near the bottom of the spadix, hidden from view inside the sheath of the spathe, the spadix bears two rings of small flowers. The upper ring bears the male flowers, the lower ring is spangled with bright red-orange carpels. The "fragrance" of the titan arum resembles rotting meat, attracting carrion-eating beetles and flesh flies (family Sarcophagidae) that pollinate it. The inflorescence's deep red color and texture contribute to the illusion that the spathe is a piece of meat. During bloom, the tip of the spadix is approximately human body temperature, which helps the perfume volatilize; this heat is also believed to assist in the illusion that attracts carcass-eating insects. Both male and female flowers grow in the same inflorescence. The female flowers open first, then a day or two following, the male flowers open. This usually prevents the flower from self-pollinating. After the flower dies back, a single leaf, which reaches the size of a small tree, grows from the underground corm. The leaf grows on a somewhat green stalk that branches into three sections at the top, each containing many leaflets. The leaf structure can reach up to 6 metres (20 ft) tall and 5 metres (16 ft) across. Each year, the old leaf dies and a new one grows in its place. When the corm has stored enough energy, it becomes dormant for about four months. Then, the process repeats.

Amorphophallus titanum is endemic to western Sumatra, where it grows in openings in rainforests on limestone hills. The plant is cultivated by botanic gardens and private collectors around the world.

In cultivation, the Titan Arum generally requires 7–10 years of vegetative growth before blooming for the first time. After its initial blooming, there can be considerable variation in blooming frequency. Self-pollination is normally considered impossible, but in 1999, Huntington Botanical Garden botanists hand-pollinated their plant with its own pollen from ground-up male flowers. The procedure was successful, resulting in fruit and ten fertile seeds from which several seedlings eventually were produced. Additionally, a Titan Arum at Gustavus Adolphus College unexpectedly produced viable seed through self-pollination in 2011.