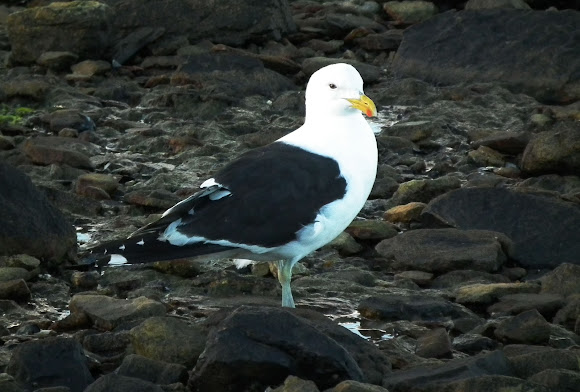 Also known as the Dominican Gull. It is the only Larus gull found in the Southern Ocean. Unlike the Larus gulls that I'm used to in the Northern Hemisphere, these gulls didn't seem to be very numerous around human settlement. They also didn't follow us very far from the shore. They superficially resemble the lesser and greater black-backed gulls, and the size is somewhere in between the two.

Common along coasts, but breed on remote coastal plains, away from humans.

These were really common birds, but I didn't see any away from land. When I've been at sea in the Northern Hemisphere, I've observed black-backed gulls quite far from the coast. Perhaps because the Southern Ocean is particularly rough, these gulls don't venture very far from land (gulls in general are coastal birds rather than true seabirds).

What a wonderful gull! Cool discussion on "Southern Ocean!" :)

I'm curious about the 'only Larus in the southern ocean'? L.pacificus exists on the southern coast of Australia, Tasmania and down to Macquarie island?

Nice spotting. These guys look so much like Larus pacificus but less common for us. Good to see the subtle differences. Thanks Laura.