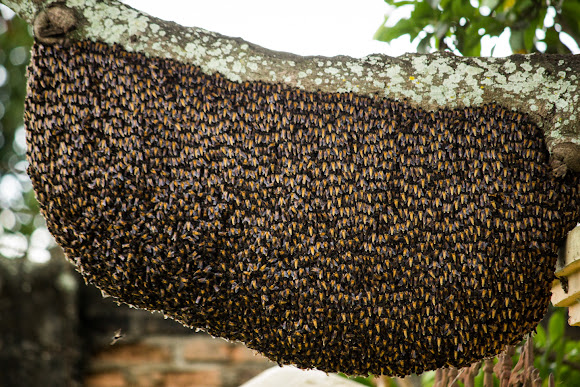 Apis dorsata are found in south and southeast Asia, and have never been domesticated. However, that doesn't stop honey hunters from collecting honey from wild colonies, a dangerous undertaking as the bees are very defensive.

Seen in the middle of the town of Sungaipenuh, near the Kerinci Seblat National Park, Sumatra, Indonesia.

This huge mass of bees suddenly appeared on the tree of a nearby home the other day. Thankfully, after two days they moved on without any incident, and weren't building a new hive as we had feared. Notice their "defensive wave" at about the 8 second mark in the video, warning whatever perceived threat they see (I believe a passing motorcycle) to back off.

Wow! That is impressive ~ nice shots!

Give that a whack with a stick and see what happens!! I can here it buzzing away from here. Very impressive photos, Luke. Well spotted... and cheers for the video. A nice touch :-)