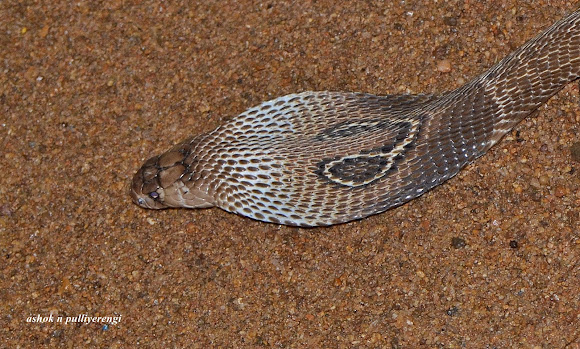 We need to remember, that snakes are not under threat from other wild life, but these magnificent creatures are under threat from human beings. Cobras have good eyesight and a keen sense of smell. Cobras, especially those found in South India have a distinct pair of circular ocelli on the rear of the hood. These patterns seem to be connected by a curved line, which appear like spectacles, hence the name spectacled cobra.Family: Elapidae Adult Size: 4 to 7 feet, sometimes significantly longer Range: Found in many closely related forms from Pakistan over India and Sri Lanka into western Southeast Asia, south to Malaysia. Habitat: Indian cobras are found in many habitats but generally prefer open forest edges, fields, and the areas around villages, often with water in the vicinity. They are found anywhere their prey, rats, are abundant.

No fixed habitat like dense jungle or scrub lands. With unchecked habitat destruction, cobras can be found in open places and very close to dwelling places too. Cobras are active both during the night and day.

As humans encroach on Asian rainforests, human/cobra conflict has increased

You are right Ashok, Humans are its ultimate enemy. Lots of times, they are being killed due to ignorance of the people and of course fear.

Fantastic photos and I appreciated your description.