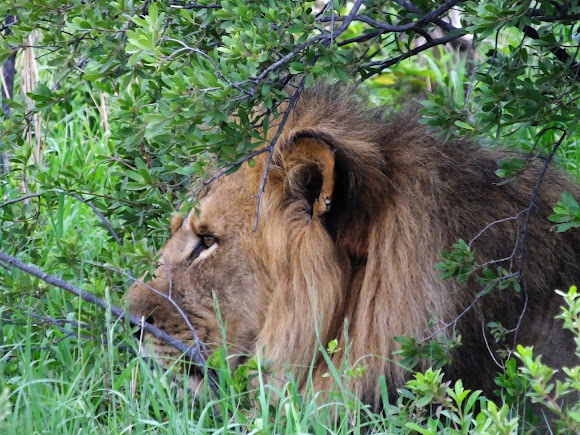 Spotting 3,000 is dedicated to Cecil the lion, in Hwange park. The African lion has a complex social order. A male or males(usually brothers, but sometimes merely "friends") holds and protects a pride, mates with the females, and protects his offspring. If a male is deposed, by a rival or a hunter, the new male who takes over the pride will kill the prior male's offspring to bring the female into estrous more quickly so he can mate with them. Cecil was 13 1/2 when an American hunter illegally shot him, after baiting him out of Hwange and into the Gwayi reserve area. He had lost his pride once when he was 10, and after befriending jericho, regained control of his pride group. He has been part of an Oxford study for many years. For anyone who has not been inundated with media on this http://www.dailymail.co.uk/news/article-... is a complete article with pictures of cecil and his co leader jericho.

Hwange park near the "main camp" entrance an hour or so before dusk. In the brush at the side of the road. In Kruger I was close enough to a male lion to hear him breathing, but he was recently fed and half asleep. This lion was engaging us with his eyes. As the rest of the vehicles left, he began the moaning cry that is a lion summoning his pride to keep him company.

While I can't say with 100% certainty this IS Cecil, as our guide didn't give us a name(at least not that I heard, as my ears/brain had trouble fully translating the Dutch and African accented British English accent and our guide was talking about him pretty rapid fire) he was collared. He is dark maned with a brown ruff. And we were in his territory near main camp. His eyes look more like Cecil's than jerichos. When we saw the collar we joked that this was how our guide found him and saved him as our finale for the safari. That's when we were told he was part of a long term Oxford safari. I do know he made us late leaving the park, and only the pictures our guide showed the gate keeper(next spotting) kept him from incurring a fine. By the time we left, Cecil had moved to the center of the exit road and we had to go the long way out as our guide said that passing a lion in that position is asking for a charge from the lion. I have many more pictures of him to go through and will post more as I can

and more good news... from the US Senate. www.huffingtonpost.com/entry/senate-ceci...

Thank you for these images Karen.

That is excellent news. I will be keeping up to date as much as possible. Thank you again.

Thank you for your kind words. The latest encouraging news, is that Jericho is caring for the pride as if they were his blood, which is not entirely unheard of. http://www.dailykos.com/story/2015/07/31...

Thank you so much for posting this.. My heart has been broken over the tragic loss of Cecil. Not to mention the fact that African Lions are my favorite animal. My hope is that there will be enough support to protect his cubs so that his legacy can pass on to yet another generation.

Thanks for sharing these images, Karen! Very sad what happened..I hope worldwide's social media reactions make an impact in preventing this from happening again, or at least in increasing controls, protection of endangered species and penalties for ilegal hunting. :-/

Petition seeking to have the US list lions as an endangered and protected species will insure his death wasn't just for one man's vanity https://secure.humanesociety.org/site/Ad...

Having compared the photos of Jericho and Cecil that are circulating on the 'net to my photos, I am sure it is Cecil, but the guide didn't mention the name or if he did I didn't catch it. His pride is the one inhabiting this area. Just leaving the disclaimer for that tiniest chance I am wrong.

Whether or not this magnificent animal is Cecil does not really matter. Whoever he is, he deserves to live his life and to be protected. Trophy hunters are sick people.

What a magnificent King! What a hateful dentist...I simply cannot understand the mindset of such people. RIP, Cecil...I am hoping Cecil's hunting and brutal kiling will lead to a Ban.

Thank you, Lisa. I have been circulating the petitions to have the hunter extradited. Looks like that has gotten quite a bit of attention.

I sure hope so. At least then, it wouldn't be in vain!

So very sad... goodbye Cecil.
May your death be an awakening to the world to BAN HUNTING, like Costa Rica did 2 years ago.

Thanks for sharing! We are all so outraged and heartbroken over this inhumane killing of such a magnificent beast.