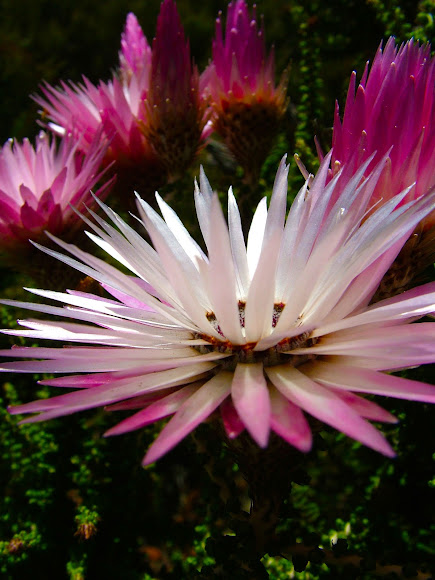 Plants are rigid, erect, single-stemmed, woody shrubs up to 1.2 m tall. Main stems are up to 60 mm diameter. Branches are densely leafy and also have numerous short leafy stalks at right angles to the main branches. Main branches decrease in length from the base upwards so that many plants resemble miniature Christmas trees. Leaves are very small, knob-like. Flower heads, borne terminal on branches, are up to 60 mm in diameter and contain 800 - 1000 individual flowers with very showy bright pink bracts. The bracts fade to almost white and become worn with age. Pappus is present and up to 150 pappus bristles per flower have been counted. For more details about the structure of these flowers see Asteraceae. Flowers are borne from September to January.

Distributed throughout the Western Cape on mountain slopes and in valleys, mostly on sandy soil and at altitudes ranging from sea level to 1 500 m.

Derivation of name and historical aspects: The name Phaenocoma is derived from the Greek 'phaino': to shine, and 'coma': hair. This refers to the shiny bracts, which looks like a 'shiny hairdo'. Jackson (1990) commented on the lack of hair on the bracts but did not offer an alternative explanation.

I think this beauty should be the new cover for "Fynbos of Western Cape" mission! Good job Wendy!!