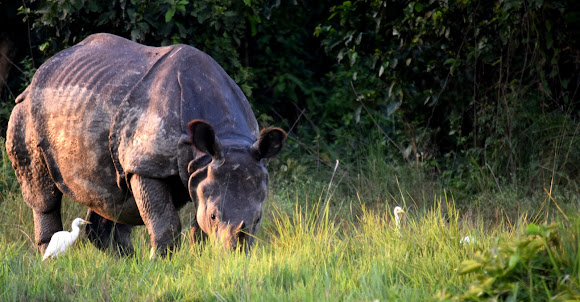 The Indian rhinoceros (Rhinoceros unicornis), also called the greater one-horned rhinoceros and great Indian rhinoceros, is a rhinoceros native to the Indian subcontinent. It is listed as Vulnerable on the IUCN Red List, as populations are fragmented and restricted to less than 20,000 km2 (7,700 sq mi). Moreover, the extent and quality of the rhino's most important habitat, alluvial grassland and riverine forest, is considered to be in decline due to human and livestock encroachment. The Indian rhinoceros once ranged throughout the entire stretch of the Indo-Gangetic Plain, but excessive hunting and agricultural development reduced their range drastically to 11 sites in northern India and southern Nepal. In the early 1990s, between 1,870 to 1,895 rhinos were estimated to have been alive.In 2015, a total of 3,555 Indian rhinoceros are estimated to live in the wild.