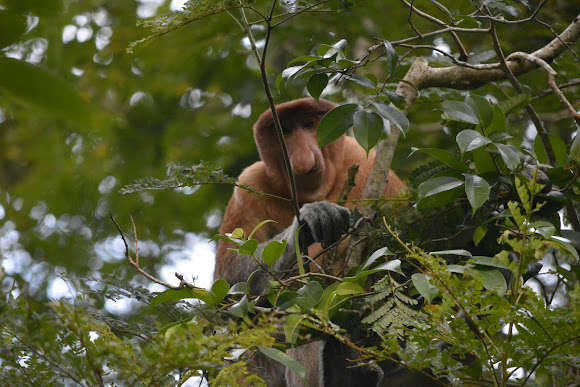 The Proboscis monkey or long-nosed monkey, known as the bekantan in Malay, is a reddish-brown arboreal Old World monkey that is endemic to the south-east Asian island of Borneo, this species co-exists with the Bornean Orang-utan. The monkey also goes by the Malay name monyet belanda ("Dutch monkey"), or even orang belanda ("Dutchman"), as Indonesians remarked that the Dutch colonisers often had similarly large bellies and noses. This species of monkey is easily identifiable because of its unusually large nose. The proboscis monkey is a large species, being one of the largest monkey species native to Asia. Only the Tibetan macaque and a few of the gray langurs can rival its size. Sexual dimorphism is pronounced in the species. Males have a head-body length of 66 to 76.2 cm (26.0 to 30.0 in) and typically weigh 16 to 22.5 kg (35 to 50 lb), with a maximum known weight of 30 kg (66 lb). Females measure 53.3 to 62 cm (21.0 to 24.4 in) in head-and-body length and weigh 7 to 12 kg (15 to 26 lb), with a maximum known mass of 15 kg (33 lb). Further adding to the dimorphism is the large nose or proboscis of the male, which can exceed 10 cm (3.9 in) in length, and hangs lower than the mouth. Nevertheless, the nose of the female is still fairly large for a primate. The proboscis monkey has a long coat; the fur on the back is bright orange, reddish brown, yellowish brown or brick-red. The underfur is light-grey, yellowish, or greyish to light-orange. The face is orange-pink. The male has a red penis with a black scrotum. Both sexes have bulging stomachs that give the monkeys what resembles a pot belly. Many of the monkeys' toes are webbed.

The proboscis monkey is endemic to the island of Borneo and can be found on all three nations that divide the island: Brunei, Indonesia, and Malaysia. It is most common in coastal areas and along rivers. This species is restricted to lowland habitats that may experience tides. It favors dipterocarp, mangrove and riverine forests. It can also be found in swamp forests, stunted swamp forests, rubber forests, rubber plantations, limestone hill forests, nypa swamps, nibong swamps, and tall swamp forests, tropical heath forests and steep cliffs. This species usually stays at least a kilometer from a water source. It is perhaps the most aquatic of the primates and is a fairly good swimmer, capable of swimming up to 20 m (65.6 ft) underwater. It is known to swim across rivers. Aside from this, the proboscis monkey is largely arboreal and moves quadrupedally and by leaps. It is known to jump off branches and descend into water.

This Group of Proboscis Monkey has made the surrounding area of the Park Headquarters of Bako their home. They can usually be seen in the early morning and late afternoon hours and are already familiar with humans.