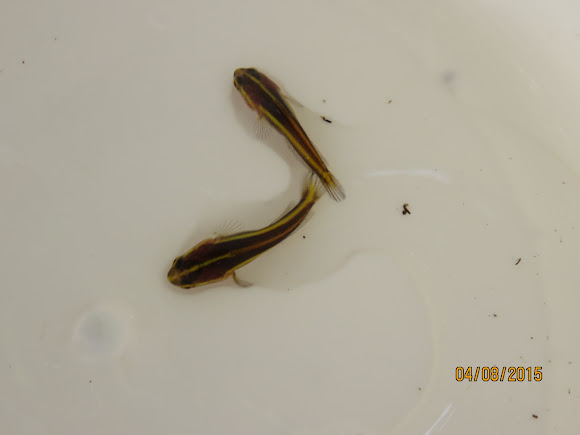 Cyclone Khomen had brought incessant rains and the drain outside my house was flooded...we were marooned. The water began to recede from yesterday and today I was mesmerized by specks of dancing gold in the rain water...turned out to be a school of tiny fish. The rainwater drain connects to 2 jheels (large lakes) nearby...it was clear these fish had been swept out of their homes. I dipped a big plastic bowl to fish a few but the entire school simply and synchronously descended a little deeper...I caught only two which I released after photographing. The last two photos show the shimmering effect of these fish in the waters they swam in.

Any ID help is welcome. I was watching the fish cluster when a gentleman taking his morning walk stopped to tell me these were baby Lyata mach (mach = fish) Lyata as far as I know is Channa sp. He said the mom was lower down...and the babies were clustering over her head. Sort of parental care.

Have you identified the fish name