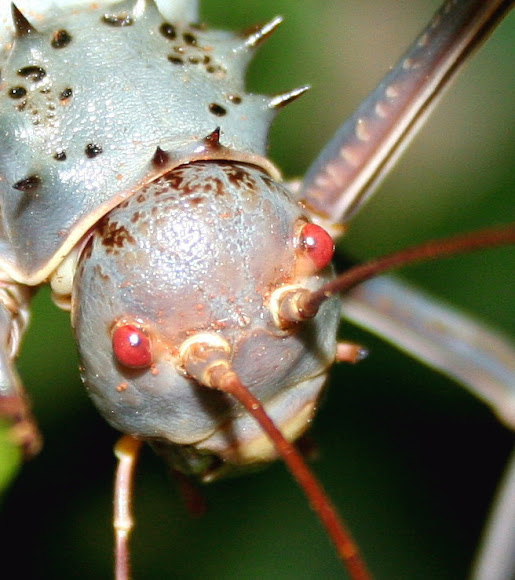 Large,fat,wingless crickets, the immature stages start out bright green. The ventral surface of the adults is pale yellow with varying amounts of green retained around the base of the legs in some.The dorsal side of the thorax is armoured and bears vicious looking spines which gives the adults a prehistoric look. The eyes and antennae (which are longer than the body) are red which I think is a feature of all 6 Acanthoplus species.

these fellows are in the process of destroying my garden, the general area experiences hot erratically wet summers and mild dry winters, corn crickets are non selective omnivores

Corn crickets are non selective omnivores even munching fresh putty from a newly glazed window. One year I attempted to grow a banana, it was about 1m high when the crickets found it and overnight it was reduced to a hole in the soil where the stem had previously been. They are also well known for their cannibalistic habit when it comes to road kills. I used to really dislike these critters but how can one hate a little chap with such a beguiling face as in photo 5? (This spotting is in Botswana)

I can say the same of moths, spiders,etc. I never willfully killed them but was a little careless - now I can't clean half the cob-webs outside without spending hours inspecting them ! - thanks to PN and all the wonderful spottings/information!!

I used to happily annihilate these prehistoric looking pests, especially in years of plagues of them, now it's my garden that suffers and the crickets survive because they all seem to look straight at me with their little "innocent" faces.

Looks like he's made of chocolate, cream, marzipan and wafer ....very nice spotting, C.Sydes !! It's so interesting to see all these different types of crickets-thanks.

Great series; especially like the first and last photos!

Amazing series! Looks like they are wearing an armor. Love the red eyes and antennas! Interesting notes about how voracious they are!

They are amazing due to how they thrive to survive