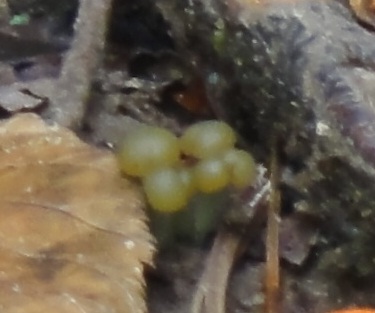 I noticed this tiny cluster while taking a closer look at another pic I took. What are these miniscule semi-translucent things? Almost two years later, I ran across what it must be while using an identification key for another unknown (to me) fungus I have found. Thanks to MushroomExpert.Com's key: "Fruit body a small stalked club with convoluted head. Head 1-4cm across, convex and rather convoluted, margin inrolled; ochre, cinnamon to pale buff, often with olive tint; smooth, gelatinous. Stem 20-50 x 5-l0mm; pale ochre-yellow; minutely scaly-squamulose. " http://www.mushroomexpert.com/leotia_lub...