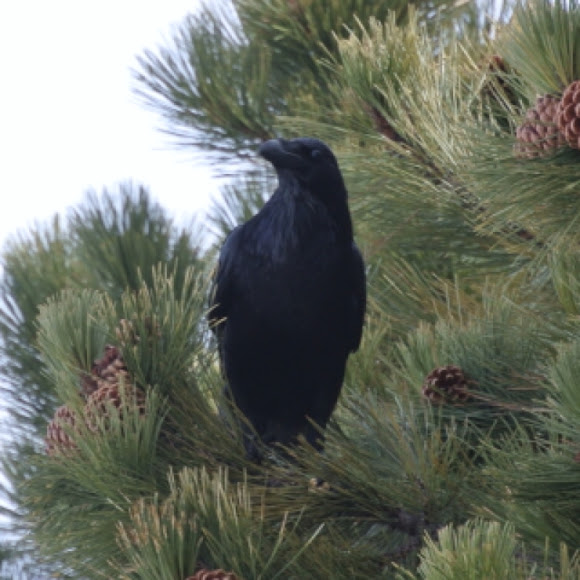 Common ravens are large, black birds with a wedge-shaped tail. They have a well-developed ruff of feathers on the throat, which are called 'hackles' and are used often social communication. These are the largest passerines. Adults reach up to 69 cm in length and from 689 to 1625 grams in weight. They are generally distinguished from other Corvus species by their large size, more wedge-shaped tail, robust bill, a tendency to soar and glide, and their frequent, harsh, croaking calls. The sexes are generally alike, although females may be smaller.

Coniferous forest around Angel Fire New Mexico. This raven was pulling seeds out of the pinecones and eating them.

Common Ravens are the largest songbirds in North America. A Raven keeps warm in the winter by upping its resting metabolic rate? When the temperature drops outside it is able to raise its metabolism slightly! Common Ravens engage in seemingly playful acts such as yanking the tails of cats and dogs. This may account for the fact that American Indian folklore often portrays them as tricksters. In many cultures it is viewed as an auspicious symbol of wisdom, fertility and creation. However in the Christian tradition it is considered a bird of ill omen, heralding evil, warfare and death. It is an acrobatic flier and has even been observed flying upside down for as far as one kilometer.