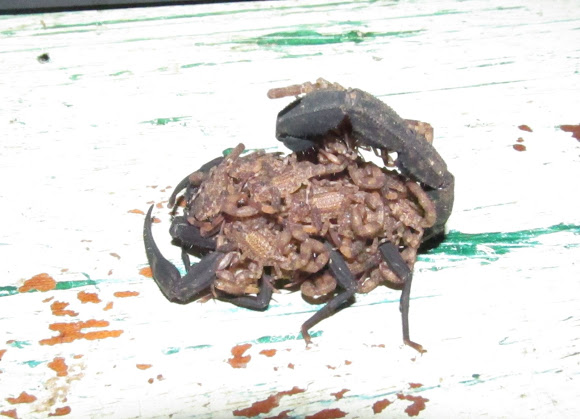 This a large black scorpion that is known to have caused fatalities, especially in the young and elderly. There are 47 species of Scorpion identified in Ecuador, 9 in the province in which we live. The largest and most dangerous are the Tityus scorpions of which there are 4 species in our province.

These scorpions are found literally everywhere: in houses, in clothes and shoes, under anything that has space, under bark in dead trees, very abundant in our area of the Amazon rainforest in SE Ecuador. We have found 3 in the shower area of our house and several others in other places in the house.

In 2014 there had been a number of deaths from scorpion stings in our area and a biotechnologist did a study of the various scorpions and developed an antivenom. We collected over 200 scorpions for his study in just a few days. Few deaths are on record as death comes quickly enough most never make it out to a medical facility where it could be recorded. This study resulted in the development of an antivenom and several reports, one of which is listed in the reference section and the other is below: https://www.ncbi.nlm.nih.gov/pubmed/2907...

Thanks Antonio & Brian. Out of the couple hundred we collected, several had babies. These were the farthest along and crawled around in the jar when put down. I suspect they were almost ready to leave their mother. I'm sure she was ready too. That's quite a load to carry everywhere. When first born, the don't really resemble scorpions, just little formless blobs :-) It was interesting and for a good cause, so I was happy to help.

This is an amazing spotting Tukup! Interesting notes as well.

Wow,great find,first time i see scorpion babys with their mom :-) Congrats and thanks for sharing