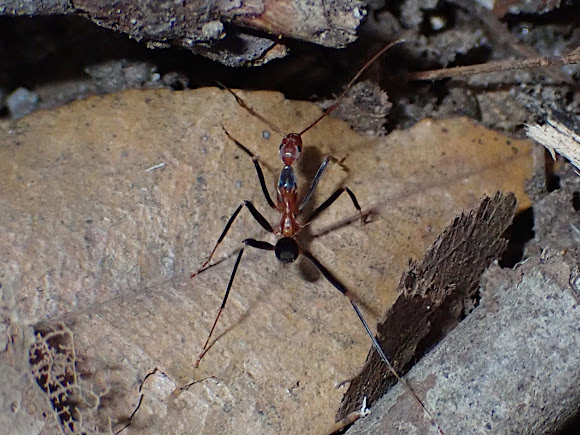 About 20mm long.
Black abdomen held up. Red head and thorax with a grey patch at the top of the thorax.
Long black legs with high knees and very long antennae give the impression of a spider.

In a nature reserve wet forested gully with ferns and tree ferns. Exploring the leaf litter.

Commonly called spider-ants.
"This species can be distinguished by its broad head, which is widest posterior of the eyes, short scapes and generally small size. L. wiburdi can be easily mistaken for Leptomyrmex cnemidatus or Leptomyrmex erythrocephalus, as the general body shape and round postocular portion of the head are similar amongst these three species which co-occur in New South Wales. There is no ‘typical’ color pattern that characterizes L. wiburdi workers, rather they take on a variety of color patterns, including the typical patterns seen in L. cnemidatus and L. erythrocephalus; workers with different color forms have even been observed in a single nest. Many individuals possess mottled brown-black coloration on the head and mesosoma, which is not seen in either L. cnemidatus or L. erythrocephalus. L. wiburdi workers evidently mimic workers of co-occurring species of Leptomyrmex. (Lucky and Ward 2010)" - ANTWIKI
https://bie.ala.org.au/species/urn:lsid:...