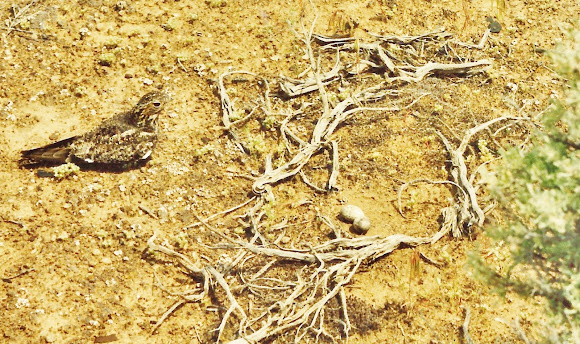 The Common Nighthawk (Chordeiles minor) is a medium-sized [3][4] crepuscular or nocturnal bird,[3][5] whose presence and identity are best revealed by its vocalization. Typically dark[3] (grey, black and brown[5]), displaying cryptic colouration and intricate patterns, this bird becomes invisible by day. Once aerial, with its buoyant but erratic flight, this bird is most conspicuous. The most remarkable feature of this aerial insectivore is its small beak belies the massiveness of its mouth. Some claim appearance similarities to owls. With its horizontal stance[3] and short legs, the Common Nighthawk does not travel frequently on the ground, instead preferring to perch horizontally, parallel to branches, on posts, on the ground or on a roof.[5] The males of this species may roost together but the bird is primarily solitary. The Common Nighthawk shows variability in territory size.[4] This caprimulguid has a large, flattened head with large eyes; facially it lacks rictal bristles. The Common Nighthawk has long slender wings that at rest extend beyond a notched tail. There is noticeable barring on the sides and abdomen,[4] also white wing-patches.[3] The Common Nighthawk measures 22–25 cm in length,[4] displays a wing span of 21-24” / 54–61 cm,[6] weighs 62-98 g,[4][6] and has a life span of 4–5 years.[4]

I just ran across these photos that I took in July 1998 at a High Desert campground in the sunstone collecting area near Plush, Oregon. She tolerated my presence until I took one step too close, then she got a bit upset as you can see in the last photo. I snapped this one quickly, then left her to tend her nest