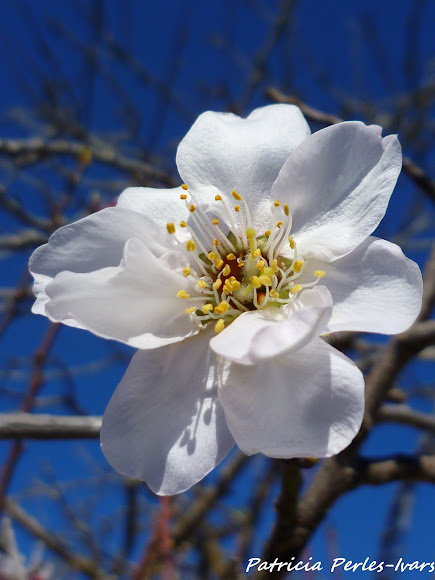 The almond is a deciduous tree, growing 4–10 metres (13–33 ft) in height, with a trunk of up to 30 centimetres (12 in) in diameter. The young twigs are green at first, becoming purplish where exposed to sunlight, then grey in their second year. The leaves are 3–5 inches long,with a serrated margin and a 2.5 cm (1 in) petiole. The flowers are white to pale pink, 3–5 cm (1–2 in) diameter with five petals, produced singly or in pairs and appearing before the leaves in early spring.

The fruit of the almond is a drupe, consisting of an outer hull and a hard shell with the seed (which is not a true nut) inside. Shelling almonds refers to removing the shell to reveal the seed. Almonds are sold shelled (i.e., after the shells are removed), or unshelled (i.e., with the shells still attached). Blanched almonds are shelled almonds that have been treated with hot water to soften the seedcoat, which is then removed to reveal the white embryo. Spain has one of the most diverse commercial cultivars of almonds. It is grown in Spain's Catalonia, Valencia, Murcia, the Balearic Islands, Andalusia, and Aragón regions