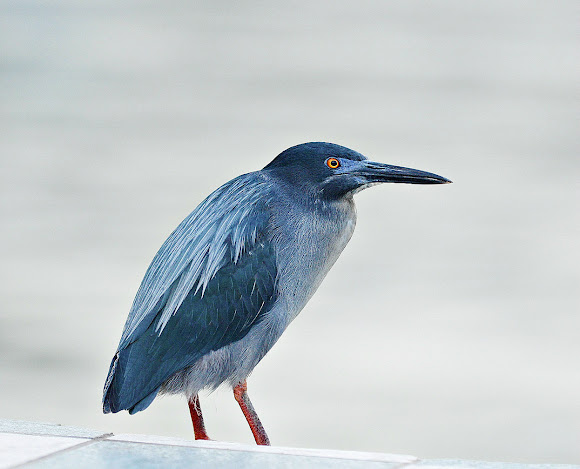 found near the fisher wharf on santa cruz island. The Lava Heron (Butorides sundevalli), also known as the Galapagos Heron, is a species of heron endemic to the Galapagos Islands. The adult is slate-grey, which helps it blend in with the hardened lava. The back feathers typically have a silvery sheen and it has a short crest on its head. When breeding, the heron has a black beak and bright orange legs, but they fade to grey after the breeding season. Lava Herons are typically seen hunched over and they have a sharp alarm call. These highly territorial birds are found in intertidal zones and mangrove groves on all of the Galapagos islands. The Lava Heron stalks small crabs and fish slowly before quickly spearing and eating them. They have also been known to eat the flies that gather near cacti. Unlike most herons, these birds nest in solitary pairs in either the lower branches of mangrove trees or under lava rocks. They can breed year-round, though typically from September to March, and can mate up to three times a year. These birds have no fear of humans. This heron is considered a subspecies (or even just a colour morph) of the Striated Heron B. striata by some authorities (including the AOU and BirdLife International), and was formerly "lumped" with this species and the Green Heron B. virescens as the Green-backed Heron B. striatus.