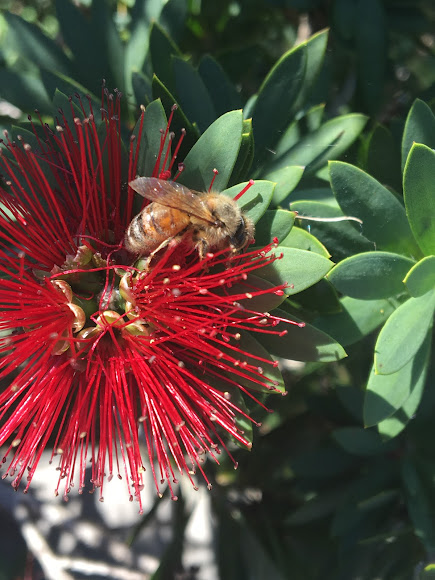 Evolution of bees: Nearly 125 million years ago, when the first flowering plants evolved, some wasps made a switch from hunting prey to gathering pollen. The wasps were hunting for insects that ate pollen or drank nectar. It didn’t long for the wasps to discover the countless advantages of consuming pollen over hunting so the wasps decided to switch. Pollen is rich in protein and pollen doesn’t fight back like the other insects do which made it easier to acquire. In order to do this, they had to make certain adjustments to be better suited to the environment thus creating the bees. * If you look at a bee and compare it to wasp you can see that female bees and female wasps are hairless and it is only the female bees and wasp bees that have stingers Bee Anatomy: Like all insects, bee’s have a head, a thorax, and an abdomen and they also have six legs and two pairs of wings. Some key features of bees are that they have two antennae that are used to touch and “smell”, two compound eyes and three simple eyes, and hairs (plumose setae) that are used to capture and hold the pollen grains. Bee Colony: Queen- One queen runs the whole hive. Her job is to lay the eggs that will ultimately be the hive’s next generation of bees. The queen also produces chemicals that guide the behaviors of the worker bees and the drones. Workers- these are all female bees and their roles are to search for food, build and protect the hive, and clean and circulate air. Workers are the only bees that will ever be seen outside of the hive. Drones- These are the male bees, and their purpose is to mate with the new queen. The drones live in the hive during the spring and summer but leave during the winter. Fun Facts: -The oldest examples of bees in art are rock paintings in Spain which have date to 15,000 BC. -Jars of honey were found in the tombs of pharaohs such as King Tutankhamun. -It is estimated that one third of the human food supply depends on pollination by insects which includes bees. -In the Indonesian dish botok tawon from Central and East Java, bee larvae are eaten as a companion to rice, after being mixed with shredded coconut, wrapped in banana leaves, and steamed. Delicacy

Tropical climates and heavily forested areas as well as in gardens, woodlands, orchards, meadows and other areas where flowering plants are abundant.