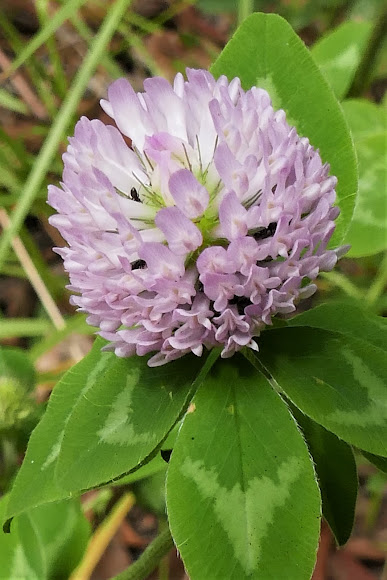 Persicaria capitata is a species of plant in the buckwheat family Polygonaceae. It is native to China, the Indian Sub-continent and south-eastern Asia, but grown as an ornamental in other countries, and is becoming widely naturalised in southern and eastern Australia. There are several common names including pink-headed persicaria, pinkhead smartweed, pink knotweed, Japanese knotweed, and pink bubble persicaria. It is a prostrate herb with variegated leaves, and has a trailing habit. The leaves are 1–6 cm long, 0.7–3 cm wide with pink to red bands or blotches and short scattered hairs. However, my spotting had green leaves, not pink or red.

Spotted in dense native bushland in the Fox Valley Reserve, along its southern boundary at North Epping in Sydney.

Persicaria capitata is used in traditional Chinese medicine. It can be brewed as a tea and consumed for the treatment of a range of urological disorders, such as kidney stones and urinary tract infections. The plant contains anti-bacterial and anti-inflammatory agents, as well as antioxidants.

So do I, Sukanya. Yes, it was a little black ant, and having a lovely time too. Ants tend to like sweet things.

There are insects...ants...I think...investigating the flower. I always like these two for one photos.