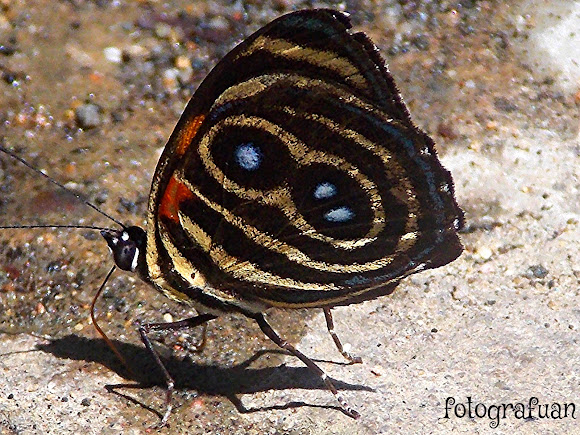 There are about 20 species in the genus Callicore, all of which bear distinctive and graphic patterns on the underside hindwings, often resembling numbers or letters of the alphabet. The uppersides of all species are blackish, marked on the forewings with bright red or orange bands. The hindwings of several species also have red or orange markings but in most species they are plain black, with a very reflective brilliant blue sheen. Unfortunately these beautiful butterflies are killed in vast numbers for their wings which are used by the souvenir trade for the production of decorated plates, jewellery, place mats and other trivia. In Callicore tolima the upperside forewings of both sexes are black with a broad orange or orange-red swathe running diagonally. The hindwings are dark brown, with a metallic blue patch. Callicore tolima is distributed from Mexico to Ecuador. There are 9 named subspecies including the illustrated denina which is endemic to Colombia.

This species inhabits cloudforest at elevations between about 800-1800m

This image was taken in the canyon of Rio Claro

thanks james,,,your contribution was very important