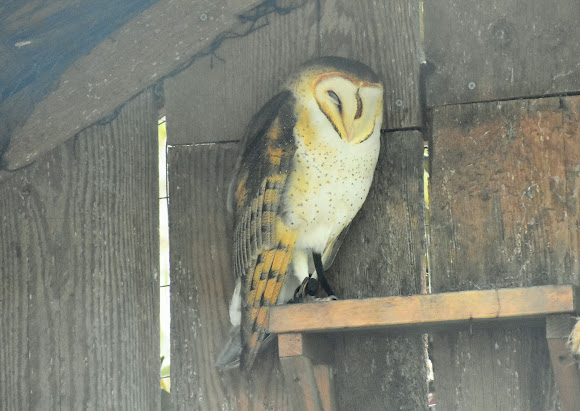 The barn owl is a medium-sized, pale-coloured owl with long wings and a short, squarish tail and a heart shaped face. The bird's head and upper body typically vary between pale brown and some shade of grey (especially on the forehead and back) in most subspecies. Some are purer, richer brown instead, and all have fine black-and-white speckles

Spotted at the Barn owl exhibit at the Northwest Trek Wildlife Park. The barn owl is a bird of open country such as farmland or grassland with some interspersed woodland, usually at altitudes below 2,000 metres (6,600 ft) but occasionally as high as 3,000 metres (9,800 ft) in the tropics. This owl prefers to hunt along the edges of woods or in rough grass strips adjoining pasture. The barn owl is found almost everywhere in the world except polar and desert regions, Asia north of the Himalayas, most of Indonesia, and some Pacific islands.(wikipedia)

This owl does not hoot, but utters an eerie, drawn-out shriek. The barn owl is nocturnal over most of its range, but in Britain and some Pacific islands, it also hunts by day. Barn owls specialise in hunting animals on the ground and nearly all of their food consists of small mammals which they locate by sound, their hearing being very acute. They mate for life unless one of the pair gets killed, when a new pair bond may be formed. Breeding takes place at varying times of year according to locality, with a clutch, averaging about four eggs, being laid in a nest in a hollow tree, old building or fissure in a cliff. The female does all the incubation, and she and the young chicks are reliant on the male for food. When large numbers of small prey are readily available, barn owl populations can expand rapidly, and globally the bird is considered to be of least conservation concern.(wikipedia)

Thanks for asking Maria. The park is quite amazing it was established to showcase the animals and wildlife of the Pacific northwest in a free range area although some of the animals and birds like this barn owl are in exhibits. Some of the animals and birds were brought here for rehabilitating. I don't have the details of this barn owl, but hopefully I will get it soon and I will post it. Also the park is working on several conservation projects with wildlife agencies and other zoos trying to save endangered species like the Oregon spotted frog, Fishers, Trumpeter swans and Western toads.

Is this wildlife park for rehabilitating animals that were injured?