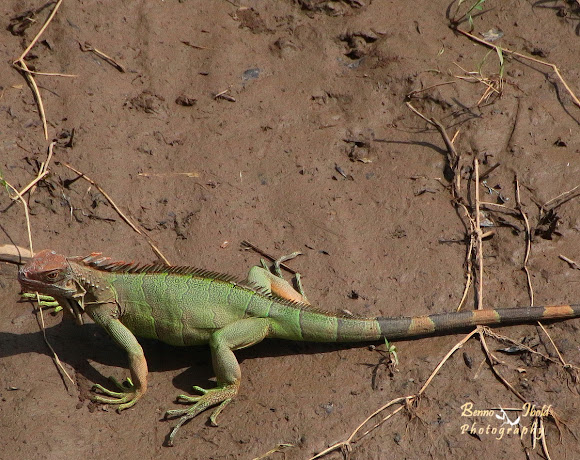 A herbivore, it has adapted significantly with regard to locomotion and osmoregulation as a result of its diet. It grows to 1.5 metres (4.9 ft) in length from head to tail, although a few specimens have grown more than 2 metres (6.6 ft) with bodyweights upward of 20 pounds (9.1 kg).

The green iguana (Iguana iguana), also known as common iguana or American iguana, is a large, arboreal, mostly herbivorous species of lizard of the genus Iguana native to Central, South America, and the Caribbean. Usually, this animal is simply called the iguana. The green iguana ranges over a large geographic area, from southern Brazil and Paraguay as far north as Mexico and the Caribbean Islands. They have been introduced from South America to Puerto Rico and are very common throughout the island, where they are colloquially known as "Gallina de palo" and considered an invasive species; in the United States feral populations also exist in South Florida (including the Florida Keys), Hawaii, the U.S. Virgin Islands and the Rio Grande Valley of Texas.The native range of the green iguana extends from southern Mexico to central Brazil, Dominican Republic, Paraguay, and Bolivia and the Caribbean; specifically Grenada, Curaçao, Trinidad and Tobago, St. Lucia, St. Vincent, and Útila. They have been introduced to Grand Cayman, Puerto Rico, Texas, Florida, Hawaii, and the United States Virgin Islands; and colonised the island of Anguilla in 1995 after being washed ashore following a hurricane. Though the species is not native to Martinique, a small wild colony of released or escaped green iguanas endures at historic Fort Saint Louis. Green iguanas are diurnal, arboreal, and are often found near water. Agile climbers, Iguana iguana can fall up to 50 feet (15 m) and land unhurt (iguanas use their hind leg claws to clasp leaves and branches to break a fall). During cold, wet weather, green iguanas prefer to stay on the ground for greater warmth. When swimming, an iguana remains submerged, letting its four legs hang limply against its side. They propel through the water with powerful tail strokes.