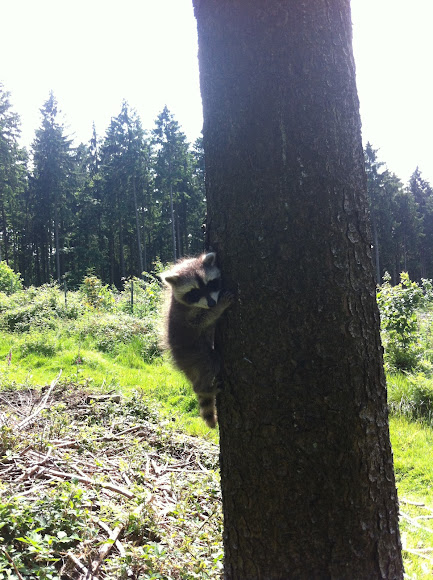 The raccoon (Procyon lotor) is native to North America and has been brought to German fur farms in the 1920s. In 1934 four raccoons were released in northern Hesse and set the first cornerstone for the first German raccooon population. A second population developed in eastern Germany after 25 individuals escaped from a fur farm in Brandenburg.

What a cute little guy! Welcome to Project Noah!

No problem, all part of the learning process :) If you have any questions, don't hesitate to ask me, or any other Ranger! You can also check out the FAQ http://www.projectnoah.org/faq

That's really interesting, sounds like quite an established population! You could put that info in your spotting description!

Thank you. I was just a little bit confused but I think I understood how all this works...

I did some research on that "raccoons in Germany (especially in my hometown Herford)" thing. I looked it up in the archive of Herford and found out that they are here since 1995.

Oh my, he's an adorable little thing!! I had no idea raccoons had been introduced into Germany, I was confused by the location so looked it up - fascinating! Welcome to Project Noah, Delirium! By the way, you don't need to suggest an ID on your own spotting ;) You can just fill the info directly into the spotting if you know what it is already! Hope to see lots more from you!

Yes he is. He was a little afraid of us but instead of running away he decided to climb up that tree :D

I hope they don't come closer to the city. This place is about 1/2km from the highway.