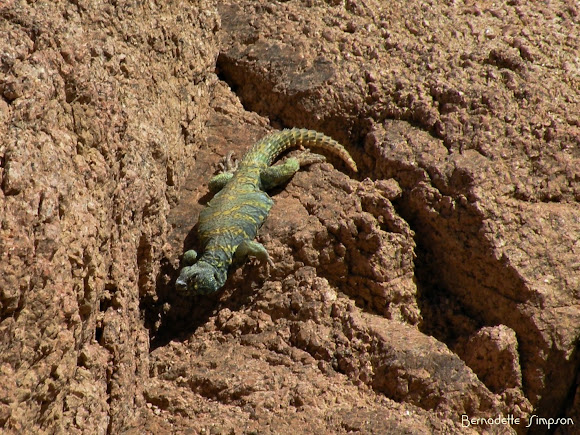 "The ornate spiny-tailed lizard is a medium-sized lizard with short, powerful legs and a large, bulky body...It has rows of spiky scales on the tail, arranged in distinct rings or ‘whorls’. The tail is broad and lies flat against the ground. The ornate spiny-tailed lizard has a longer tail than other closely related species from the genus Uromastyx. This species varies greatly in colour, both within and between the sexes, as well as with age. The male ornate spiny-tailed lizard is strikingly coloured, being predominantly blue, green or red, with an irregular reddish-brown, net-like pattern on the back. There are also yellow spots and sometimes yellow cross-bands on the back, and dark patterning on the belly." ~arkive

"The ornate spiny-tailed lizard is quite widely distributed across eastern Egypt, southern Israel and Saudi Arabia." ~arkive (Found only in South Sinai in Egypt)

I've added some photos of what is most likely the same lizard spotted a week later, Feb. 24.

Thanks, Maria! It was the first time I've seen one free in the wild. I'm excited I managed to get a shot, albeit blurry, before he scampered away and hid in a crack in the rock.