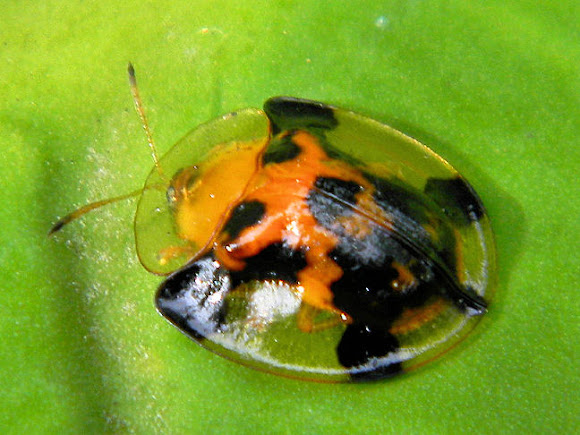 "A number of species come under the common name of tortoise beetles or tortoiseshell beetles. They are characterized by flattened, spiny larvae and adult beetles with broad domed oval shaped elytra." http://keys.lucidcentral.org/keys/sweetp...

Spotted just after rain on taro (Xanthosoma sagittifolium) in a large semi-urban yard & garden situated next to a disturbed patch of remnant lowland forest.

Thanks Agnes! Your link's image of Aspidimorpha punctum is a closer pattern match than A. westwoordi which itself was a close match. And there are records from New Guinea too!

I love this! So cool! My favorite kind of beetle. I found 2 here in the USA, but they don't look exactly like this. Way to go!

Amazing! I want one here in Maine to show my daughter who loves to study beetles!

I will check out Aspidomorpha, Emilie. New Guinea (Indonesia or otherwise) shares a lot of biological affinities with Australia...

Looks a lot like Aspidomorpha westwoordi, which is an australian species. I'm not sure they exist in Indonesia, so I propose Aspidomorpha sp. Maybe someone else can narrow the species down.

I love tortoise beetles, I didn't know they existed until I saw them here in Project Noah. Thanks for sharing Scott.