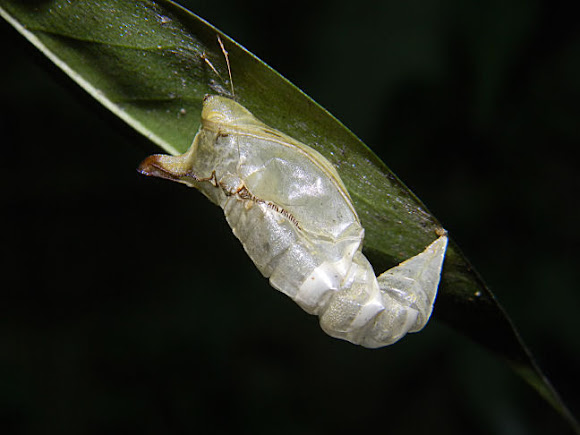 This is the shell of a (vacated) chrysalis in which a pupa metamorphosed into, and then from which emerged, a butterfly. Whereas it may be a stretch, there is some resemblance to the live chrysalis of a green-spotted triangle as seen here http://www.projectnoah.org/spottings/153... observed previously in this same locale. "It is important to differentiate between pupa, chrysalis and cocoon. The pupa is the stage between the larva and adult stages. The chrysalis is a butterfly pupa. A cocoon is a silk case that moths, and sometimes other insects, spin around the pupa." <Wikipedia>

Spotted on the underside of a sapling soursop leaf (Annona muricata) in a large semi-urban yard & garden near the border with a disturbed patch of remnant tropical forest.