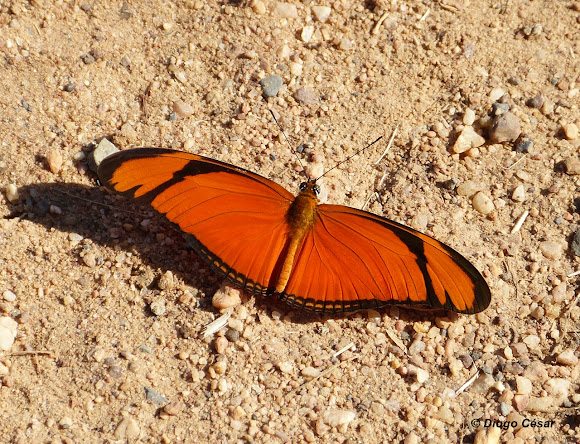 Family: Nymphalidae Subfamily: Heliconiinae Caterpillar Hosts: Passion-vines including Passiflora lutea in Texas. Adult Food: Nectar from flowers including lantana and shepherd\'s needle; probably others. Dryas iulia (also spelled iulia), comm only called the Iulia butterfly or Iulia Heliconian, is a species of butterfly (an insect). The sole representative of its genus, the Julia is native from Brazil to southern Texas and Florida, and in summer can sometimes be found as far north as eastern Nebraska. Over 15 subspecies have been described. Its wingspan ranges from 82 to 92 mm, and it is colored orange (brighter in male specimens) with black markings; this species is somewhat unpalatable to birds and belongs to the "orange" Batesian mimic complex (Pinheiro 1996). It feeds on the nectar of flowers including lantana and shepherd's needle (Scandix pecten-veneris), and its caterpillars form hosts in passion vines including Passiflora affinis and Passiflora lutea (the yellow passionvine) in Texas. The Iulia is a fast flier and frequents clearings, paths, and margins of forests and woodlands.