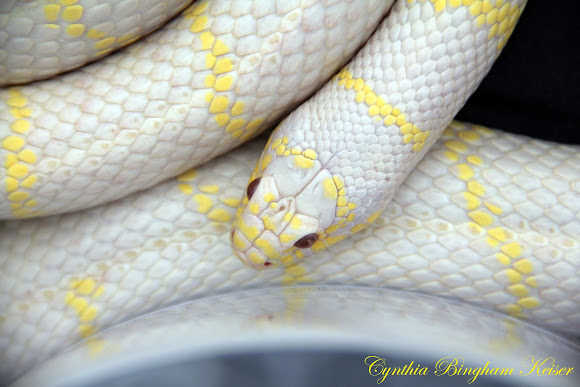 This is an old, albino King Snake that can not be released in the wild due to the albinism. Unfortunately it had a couple tumors and isn't expected to live much longer. "Adult Lampropeltis getula are 30 - 85 inches ( 76 - 216 cm). California Kingsnakes do not reach that size, seldom exceeding 48 inches. Most commonly found at 2.5 - 3.5 feet in length. Smooth, shiny, unkeeled scales. The head is barely wider than the neck. Highly variable in appearance. Most commonly seen with alternating bands of black or brown and white or light yellow, including the underside, where the light bands become wider. A striped phase with a white or light yellow stripe on the back occurs in coastal southern California. An unbanded phase with a dark belly and lateral striping occurs in the northern San Joaquin Valley and southern Sacramento Valley. A dark banded phase with a dark underside occurs in coastal Los Angeles County, some with a high number of bands. A desert phase occurs with dark black bands and narrow bright white bands. Some variants have much dark speckling in the light bands, others with much light speckling in the dark bands."

This subspecies "is found throughout California, except the damp redwood zone of the extreme northwest coast, the northeast great basin desert, and high elevations in the Sierra Nevada and other mountain ranges. Outside of the state, it occurs in southwestern Oregon, southern Nevada, southern Utah, southwestern Colorado, northwestern New Mexico, much of Arizona, and in Mexico in Sonora and Baja California."

This snake was on display with other local species as part of an educational program called Hawkwatch in the Ramona Grasslands by the Wildlife Research Institute http://www.wildlife-research.org/.