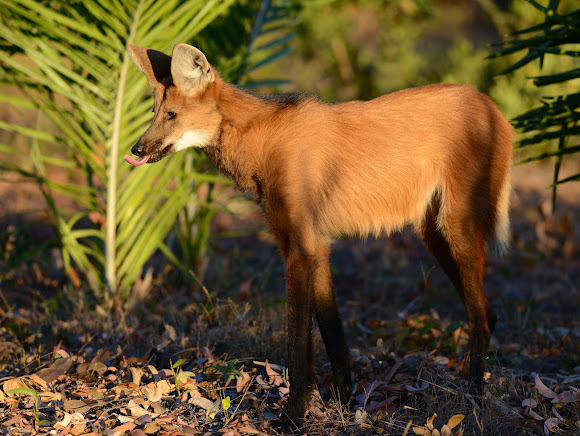 The Maned wolf is the largest canid of South America. Its markings resemble those of foxes, but it is not a fox, nor is it a wolf, as it is not closely related to other canids. It is the only species in the genus Chrysocyon (meaning "golden dog") This Maned Wolf was spotted at a place i stayed called Southwild Wolf Cliffs Camp regarded as the only reliable place to see Maned Wolfs in the wild as they regularly wonder into the camp at night and if you're really lucky they'll arrive while it's still light.

This mammal is found in open and semi-open habitats (Cerrado), especially grasslands with scattered bushes and trees, in south, central-west, and southeastern Brazil

Congratulations Stephen on your SOTW. What a beautiful animal.

Congratulations Stephen W! Your spotting won our Ranger-chosen Spot of the Week!

Beautiful image! Is this wild or captive? Where did you see it at? Including a little bit of info in the description and habitat sections is really helpful! Also increases your chances of getting SOTD or SOTW :)