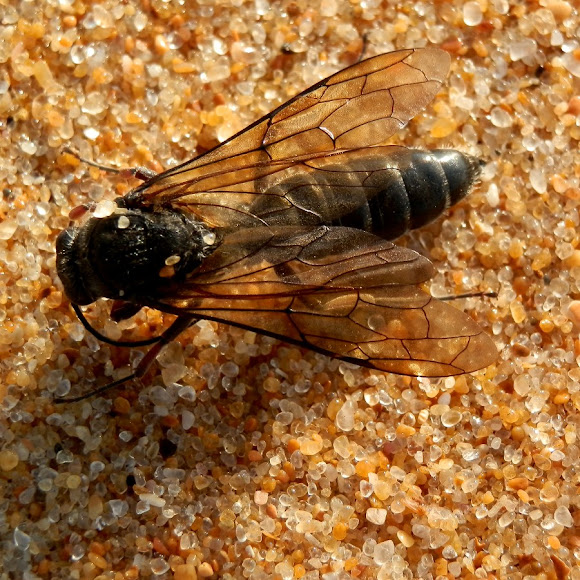 A large black wasp about 35mm long with a robust thorax, thin waist and cylindrical abdomen. The abdominal segments could have had white patches on the sides but unsure.Some setae seen on abdomen. Clear tinted wings. Legs were reddish-brown. On the underside, mouth parts were yellow.

Spotted on shore by sandy dunes

This big wasp was seen washed up on the shore - along the tide-mark. He was alive but damaged; missing part of a leg and one antenna. He could have been blown onto the waves by strong southerlies that day. We saw several insects on the sand that day. Females are wingless. The larvae are parasitoids of beetle larvae, predominantly of the Superfamily Scarabaeoidea. Males wasps in this family carry the smaller females and mate mid-air. Some also feed the females nectar from flowers. My thanks to John La Salle for identifying the family of wasp. The closest match in appearance and distribution is a Megalothynnus klugii male (web reference provided). This requires confirmation.

John La Salle, Thanks you so much for looking at this spotting and for your input. I thought about Tiphiidae - Megalothynnus sp or Thynnoidea sp but, knowing very little about wasps, I was anticipating a nudge in the right direction... I will now research further. Thanks again for your assistance.