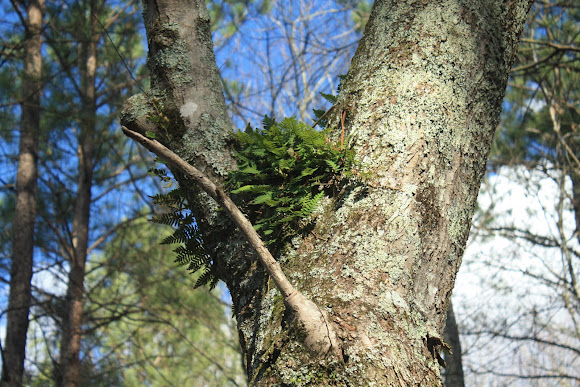 The leathery, evergreen leaves are called fronds and are 4" to 12" long. The fronds are made of smaller, rounded, oblong blades alternately arranged but tending to become opposite.

The fern is an air plant, which means it attaches itself to other plants and gets its nutrients from the air and from water and nutrients that collect on the outer surface of bark. Resurrection fern lives on the branches of large trees such as cypresses and live oaks. It is often found in the company of other air plants such as Spanish moss and wild pine.

The resurrection fern gets its name because it can survive long periods of drought by curling up and appearing dead. When just a little water is present, the fern will uncurl and reopen, appearing to resurrect. This tiny plant has even been taken on a space shuttle mission to watch it resurrect itself in space!

Hi Marcus! Would you mind adding this and other ferns you have captured to my mission: