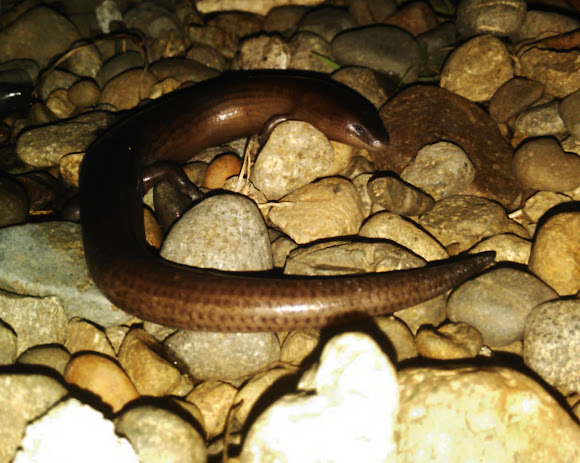 The genus Brachymeles is a unique radiation of scincid lizards almost entirely endemic to the island archipelago nation of the Philippines. This group exhibits an impressive range of morphological variation among members of the genus from small, externally limbless species to large, slender pentadactyl species (Siler et al., 2012). Additionally, the species diversity of the genus has rapidly increased in the last 5 yr (for review, see Siler et al., 2012). Following several recent targeted surveys throughout much of the range of the radiation, detailed inspections of historical and modern collections, and the incorporation of genetic data into evaluations of species boundaries, alpha diversity has increased from 15 to 36 species (Siler et al., 2012). All but two of these species are endemic to the Philippines: B. apus is known from northern Borneo and B. miriamae from Thailand (Hikida, 1982; Siler and Brown, 2010; Siler et al., 2011b, 2012). Eighteen species are pentadactyl (B. bicolor, B. boholensis, B. boulengeri, B. gracilis, B. hilong, B. kadwa, B. makusog, B. mindorensis, B. orientalis, B. samad, B. schadenbergi, B. suluensis, B. talinis, B. taylori, B. tiboliorum, B. tungaoi, B. vindumi, and B. vulcani), 13 are nonpentadactyl with incom-pletely developed limbs and reduced numbers of digits (B. bicolandia, B. bonitae, B. brevidactylus, B. cebuensis, B. cobos, B. elerae, B. libayani, B. muntingkamay, B. paeforum, B. pathfinderi, B. samarensis, B. tridactylus, and B. wrighti), and five are entirely limbless (B. apus, B. minimus, B. miriamae, B. lukbani, and B. vermis). A remarkable diversity in limb- and digit-reduced states is observed in the nonpentadactyl species, from minute limbs with 0–3 digits (B. bonitae, B. cebuensis,B. muntingkamay,B. samarensis, B. tridactylus) to moderately developed limbs with 4–5 digits on the hands and feet (B. elerae, B. pathfinderi, B. wrighti: Siler and Brown, 2010; Siler et al., 2011b, 2012). To date, little is known about the ecology and behavior of this unique radiation of lizards; however, all species are recognized to be semifossorial and have been recorded only in habitats consisting of dry, rotting material inside or underneath decaying logs or in loose soil, forest floor detritus, and leaf litter. Numerous studies have systematically revised both polytypic and widespread species complexes, underscoring how poorly understood species-level diversity within the genus was until recently (Siler and Brown, 2010; Siler et al., 2011b, 2012). Although these studies have stabilized taxonomy greatly, one remaining widespread species complex has yet to be investi-gated, the Brachymeles bonitae Complex. This group, consisting of single island and intra-island allopatric populations, is distributed across much of the northern Philippines. This type of widespread distribution is rare for endemic Philippine reptiles. A growing body of literature (Welton et al., 2010a,b; Siler et al., 2011b, 2012) has demonstrated that many Philippine endemic species possess distributions that are usually circum-scribed within one of the archipelago’s recognized faunal regions, or Pleistocene Aggregate Island Complexes (PAICs; Brown and Diesmos, 2002; Brown and Guttman, 2002; Brown and Siler, 2014: fig. 1). However, as currenty understood, populations of B. bonitae are known from three major PAICs (Luzon, Mindoro, and Visayan [central]) as well as from many small-island groups (Romblon, Babuyan) and isolated, deep-ocean islands (Lubang). Species-level phylogenetic analyses have recovered the species B. tridactylus to be nested among populations of B. bonitae, with each sampled population of B. bonitae inferred to be genetically divergent from its allopatric congener populations (Siler and Brown, 2011; Siler et al., 2011a). These two species (B. bonitaeand B. tridactylus) are the focus of this study. The genus Brachymeles was first described by Dume ́ ril and Bibron (1839) for B. bonitae, which at the time was described as a small, limb-reduced species from the capital city of Manila on Luzon Island (Figs. 2, 3). Almost 80 yr later, Taylor (1917) described Brachymeles burksi from Mindoro Island, comparing the type series of B. burksi to a specimen of B. bonitae from the Municipality of Los Ban ̃ os, central Luzon Island (CAS 62578) and not to the holotype described by Dume ́ril and Bibron (1839).

Semifossorial and typically found in dry, rotting material inside or underneath decaying logs or in loose soil, forest floor detritus, and leaf litter of lowland forest.