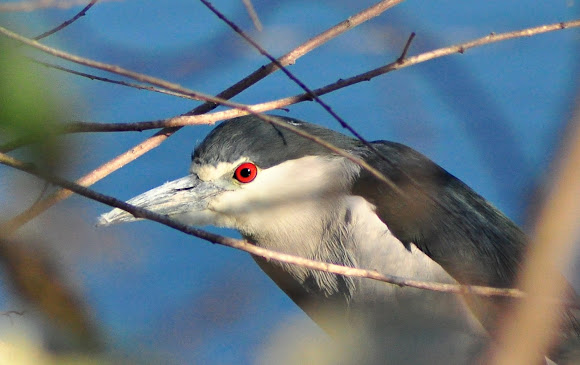 The breeding habitat is fresh and salt-water wetlands throughout much of the world. The subspecies N. n. hoactli breeds in North and South America from Canada as far south as northern Argentina and Chile, N. n. obscurus in southernmost South America, N. n. falklandicus in the Falkland Islands, and the nominate race N. n. nycticorax in Europe, Asia and Africa. Black-crowned Night Herons nest in colonies on platforms of sticks in a group of trees, or on the ground in protected locations such as islands or reedbeds. Three to eight eggs are laid.

Thank you Yuko and Leighanimal! I know right? There may not be a whole lot of other colors to that bird but those red eye more than do the job.

This is just so awesome!

What a beautiful bird! Great series.