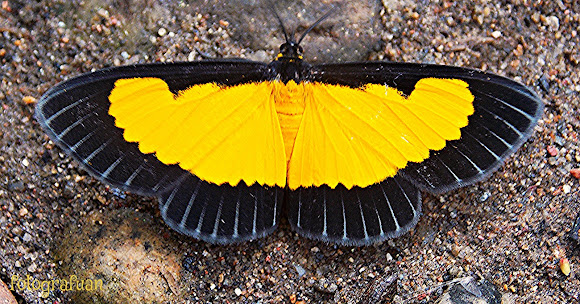 Worldwide there are over 20,000 species in the family Geometridae, of which 2,800 are placed in the subfamily Sterrhinae. The genus Xanthiris comprises several similar species including flaveolata, supergressa, involuta, superba, elegans, ops and marginata, which differ in the width of their outer wing borders, and in the shape of the black costal band. Xanthiris flaveolata is distributed throughout most of tropical South America.

Habitats This species has a wide distribution in the southern Amazon. I've seen it commonly at Rio Cristalino in Brazil, and along the Rio Madre de Dios in Peru.

Lifecycle To be completed. Adult behaviour The bright yellow and black colour theme is common amongst day-flying moths in the neotropical region and is almost certainly aposematic, i.e. either the moth is toxic to birds or it is mimicking another toxic species and gaining immunity from attack. The adults are day flying and often gather in three's and four's to imbibe mineralised moisture from wet sand along the banks of rivers.