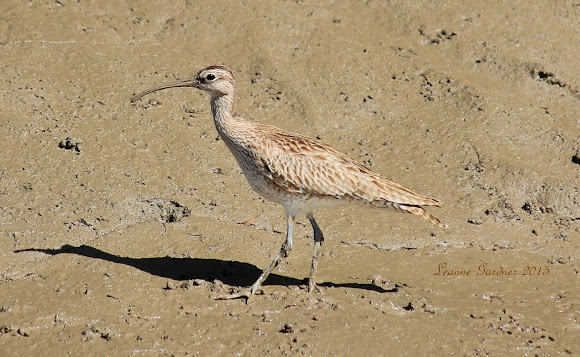 The Whimbrel is a medium-sized curlew, which is mainly streaked brown, with twin dark streaks along the crown and bill. The bill is long and slightly de-curved (curved downwards), with a pink lower base. The legs and neck are long. The body is white below, with coarsely streaked brown upperparts. In flight, the light-coloured rump and streaked tail is obvious. Whimbrels feed in small groups and roost in large flocks, often with other waders. Whimbrels are common across northern Australia and uncommon to rare further south. They breed in central Siberia to Iceland. The subspecies variegatus is the one mainly found in Australia and also the Bay of Bengal through to Melanesia, Micronesia and to New Zealand in small numbers.

Whimbrels are found mainly on the coast, on tidal and estaurine mudflats, especially near mangroves. They are sometimes found on beaches and rocky shores.