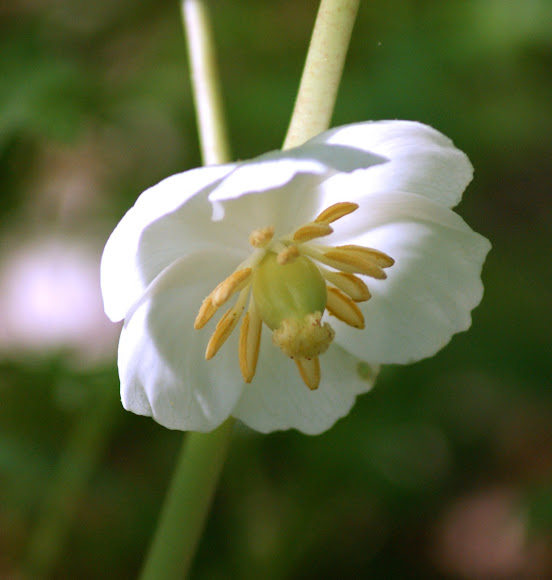 The stems grow to 30–40 cm tall, with 2 or occasionally 3 palmately lobed leaves up to 20–30 cm diameter with 5-9 deeply cut lobes on reproductive individuals, or one peltate (umbrella-like) leaf on sterile individuals. The single secund white flower 3–5 cm diameter, with six (rarely up to nine) petals, is produced at the axil of the two leaves (the upper two in a three-leaved plant); the flower matures into a yellow-greenish fruit 2–5 cm long.

Native to deciduous forests in of eastern North America. The plant is widespread and appears in clonal colonies in open, mesic woodlands. This one was photographed at Stevens Creek Heritage Area near Clarks Hill (McCormick County), SC

The ripened fruit is edible in moderate amounts, though when consumed in large amounts the fruit is poisonous. The rhizome, foliage and roots are also poisonous. Mayapple contains podophyllotoxin, which is used as a cytostatic and topically in the treatment of viral and genital warts.