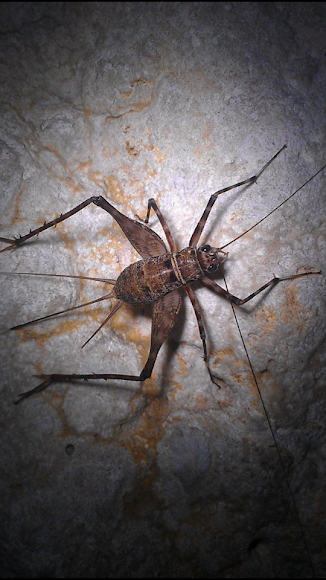 Also called Cave Cricket. Phalangopsinae are a subfamily of the cricket family Gryllidae. Placement of Phalangopsinae in Gryllidae and of genera in Phalangopsinae is controversial, with the group occasionally being considered a separate family or broken up onto other taxa.

Found worldwide in tropical and subtropical regions. Most species in the subfamily are nocturnal and can be found in rocky areas, near fallen wood, and the understory of forests.

Not so deep in a cave near Guaniquilla Lagoon. I saw him with my flashlight in an absolute pitch black area inside the cave. They form part of the diet of the bats that live in that cave ( Greater Bulldog bat ) and some spiders. I saw two of them and they seem clumsy at jumping compared to other crickets.