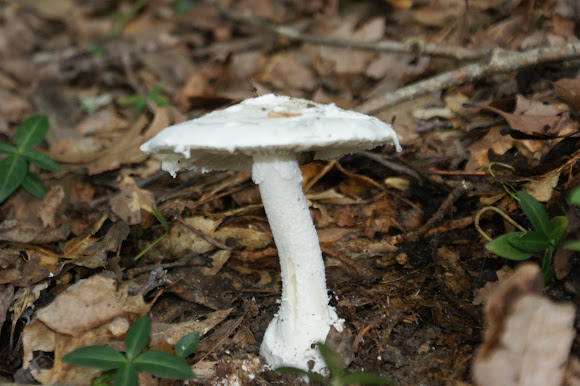 Amanita bisporigera is a deadly poisonous species of fungus in the Amanitaceae family. It is commonly known as the eastern North American Destroying Angel or the Destroying Angel. The mushroom has a smooth white cap that can reach up to 10 cm (3.9 in) across, and a stem, up to 14 cm (5.5 in) long by 1.8 cm (0.71 in) thick, that has a delicate white skirt-like ring near the top. The bulbous stem base is covered with a membranous sac-like volva. The white gills are free from attachment to the stalk and crowded closely together.

The fruit bodies are commonly found near oak, but have been reported in birch-aspen areas in the west. It is most commonly found in eastern North America. This one was photograhed in the midlands of South Carolina in Edgefield County.

Amanita bisporigera is considered the most toxic North American Amanita mushroom, with little variation in toxin content between different fruit bodies. Three subtypes of amatoxin have been described: α-, β, and γ-amanitin.