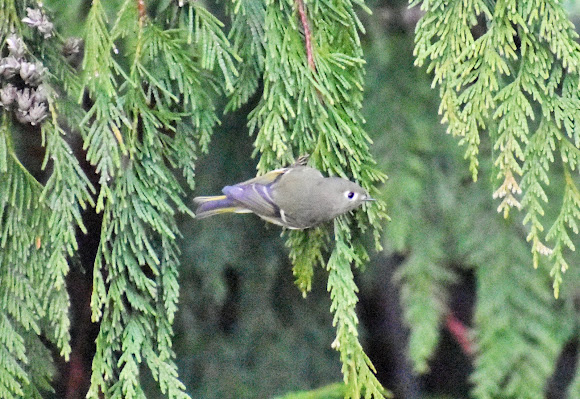 A small olive green songbird with a broken or incomplete white eye ring.

Spotted in a cedar tree in my backyard. Ruby-crowned Kinglets breed in the eastern Cascades and at very high elevations just west of the Cascade crest (e.g. on Mt. Rainier.) They also breed in the Olympics. They are common in winter in the western Washington lowlands as far as the outer coast, but are uncommon in winter in eastern Washington lowlands, where they may be found in pear and apple orchards, towns, and streamside woods. During fall and spring migrations (September to October and mid-April to early May), they are conspicuous in isolated patches of trees, orchards, and other lowland areas throughout the state.(Birdweb)

Ruby-crowned Kinglets eat tiny insects, spiders, and eggs, especially eggs that are stuck to the undersides of leaves and twigs. In winter they also eat some seeds, sap, and berries.