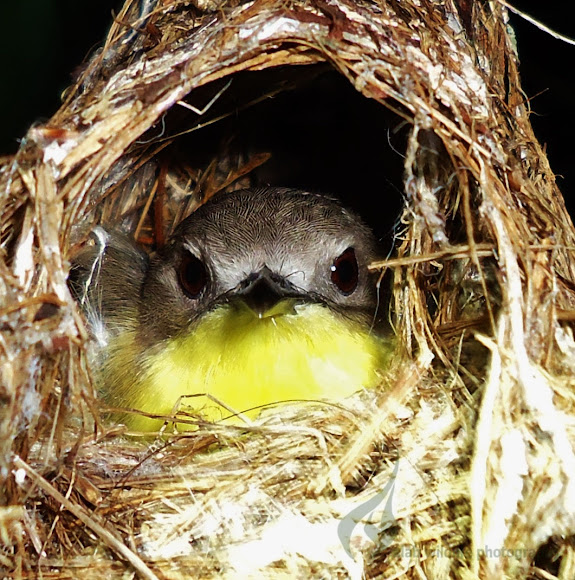 A tiny bird little bigger than a human thumb. Yellow color under its throat that turns pale grayish yellow towards the tail and olive green color on its back. It is locally called Tigwati or Tigwatihot because of its whistle like vocalization tigwati -tigwatihot-tigwati repeatedly. It starts singing as early as 3 am and late in the afternoon and considered as one of songbirds in the country with a beautiful voice. It feeds mainly on insects and invertebrates.

Thank you for the ID Malcolm Wilton-Jones.

You have an adult inside the nest.This spotting of mine shows and adult feeding a chick in the nest and has a link for the chick in the nest which includes a picture of the whole nest. http://www.projectnoah.org/spottings/234...
https://lh5.ggpht.com/kkQm6UIfbf69Vvu8S9...
Tailorbird nests are made by sewing leaves together, see this spotting by Pamsai http://www.projectnoah.org/spottings/853...

I was thinking more Sunbird as the nest appears to be in bushes instead of hanging in the open, then I thought Flyeater (Golden-bellied Gerygone), Gerygone sulphurea as being most likely. Plumage and nest type are good for that species.

I agree.it looks like a weaver nest and the bird is unlike any tailor bird I know.

Your spotting has been nominated for the Spotting of the Week. The winner will be chosen by the Project Noah Rangers based on a combination of factors including: uniqueness of the shot, status of the organism (for example, rare or endangered), quality of the information provided in the habitat and description sections. There is a subjective element, of course; the spotting with the highest number of Ranger votes is chosen. Congratulations on being nominated Shekainah!