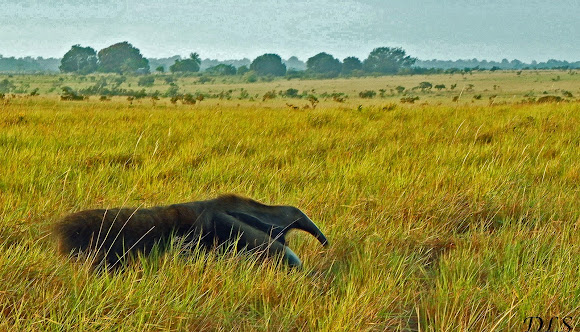 We were out on the Savannah surrounding Karanambu ranch early one morning when we came across this huge anteater casually strolling back home frrom its nocturnal activities but no sooner had we stopped the jeep to take some photos did it break into a run at break neck speed too so the photos weren't quite as clear as I would have liked them to be. It has a total body length of 182–217 cm (5.97–7.12 ft). Males weigh 33–41 kg (73–90 lb) and females weigh 27–39 kg (60–86 lb), making the giant anteater the largest extant species in its suborder. The head of the giant anteater, at 30 cm (12 in) long, is particularly elongated, even when compared to other anteaters Its tubular snout, which ends in its tiny mouth opening and nostrils, takes up most of its head. Its eyes and ears are relatively small.It has poor eyesight, but its sense of smell is 40 times greater than that of humans

This one was out on the Savannahs of Karanambu lodge in Guyana however the anteater can be found in multiple habitats including grassland and rainforest. It forages in open areas and rests in more forested habitats. It feeds primarily on ants and termites, using its foreclaws to dig them up and its long, sticky tongue to collect them. Though giant anteaters live in overlapping home ranges, they are mostly solitary except during mother-offspring relationships,

Ahh I love it! Thank you for sharing, Debbie!