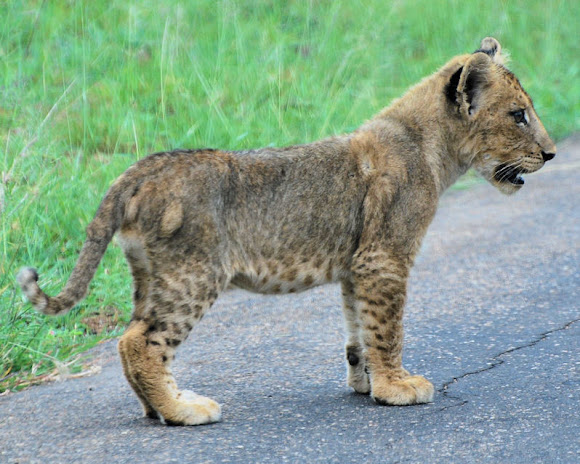 South African lions usually belong to the subspecies Panthera leo krugeri - Kruger National Park lion. The magnificent African lion is the largest of Africa's big cats and is primarily active at night, sleeping away most of the day to escape the intense heat. Lions are highly social creatures that hunt cooperatively and form cohesive groups called prides, which is unusual for cats.

Kruger Nationa Park , South Africa The frst wildlife conservation area in the history of human efforts to save planet.... Established in 1898 to protect the wildlife of the South African Lowveld, this national park of nearly 2 million hectares of unrivalled diversity of life forms fuses with historical and archaeological sights - this is real Africa.

Where is my mam? This poor cub was crying so loudly and I was so sorry - if mother do not come sun before dark, hi will be just prey for hyena, leopard or cruel adult male Lions - they usually killing all cubs form other pride just to save own blood line ( isn't all kings doing this?)

Poor little thing! This breaks my heart. :-( I really hope he and his mom could reunite!

I sincerely hope that it finds it's mama :((

Aww that's so sad, I wish there was rescues for lions to save them and rehabilitate so they go back in the wild when they are grown. Are all cubs dark the coat color looks darker then I would think

poor little mite, I hope it found its Mum soon afterwards such a cute photo though.