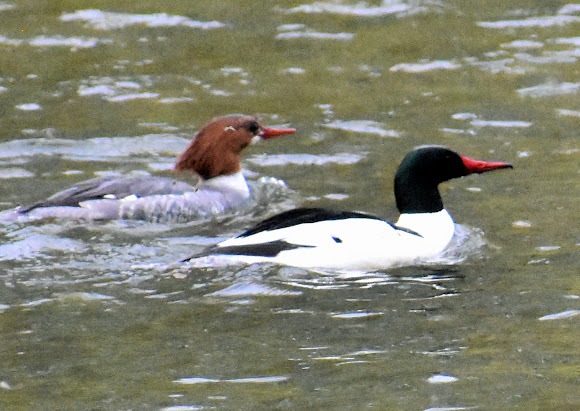 Male is on the right in breeding plumage.

Spotted in the Green River at Flaming Geyser State Park.

Like the other mergansers, these fish-feeding ducks have serrated edges to their bills to help them grip their prey, so they are often known as "sawbills". In addition to fish, they take a wide range of other aquatic prey, such as molluscs, crustaceans, worms, insect larvae, and amphibians; more rarely, small mammals and birds may be taken. As in other birds with the character, the salmon-pink tinge shown variably by males is probably diet-related, obtained from the carotenoid pigments present in some crustaceans and fish. When not diving for food, they are usually seen swimming on the water surface, or resting on rocks in midstream or hidden among riverbank vegetation, or (in winter) on the edge of floating ice. In most places, the common merganser is as much a frequenter of salt water as fresh water. In larger streams and rivers, they float down with the stream for a few miles, and either fly back again or more commonly fish their way back, diving incessantly the whole way. In smaller streams, they are present in pairs or smaller groups, and they float down, twisting round and round in the rapids, or fishing vigorously in a deep pool near the foot of a waterfall or rapid.