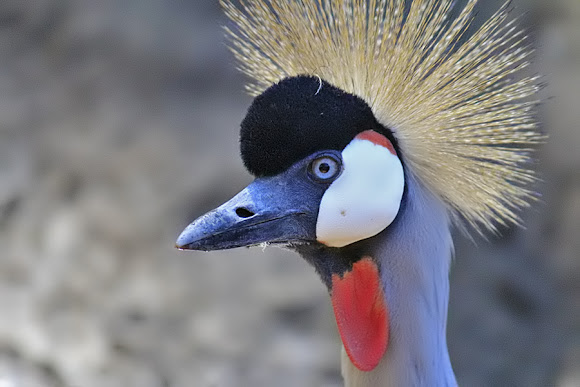 The Grey Crowned Crane (Balearica regulorum) is a bird in the crane family Gruidae. It occurs in dry savannah in Africa south of the Sahara, although it nests in somewhat wetter habitats.They can also be found in marshes, cultivated lands and grassy flatlands near rivers and lakes in eastern from the Uganda and Kenya, south to South Africa. This animal does not migrate. There are two subspecies. The East African B. r. gibbericeps (Crested Crane) occurs from eastern Democratic Republic of the Congo through Uganda, of which it is the national bird, and Kenya to eastern South Africa. It has a larger area of bare red facial skin above the white patch than the smaller nominate species, B. r. regulorum (South African Crowned Crane), which breeds from Angola south to South Africa. This species and the closely related Black Crowned Crane are the only cranes that can roost in trees, because of a long hind toe that can grasp branches. This habit, amongst other things, is a reason why the relatively small Balearica cranes are believed to closely resemble the ancestral members of the Gruidae.

Very beautiful bird, and the national bitd of Uganda where even the police officers has a small crane badge on their sholders. Nice spotting!
BR Tina

What a beautiful and regal looking bird.