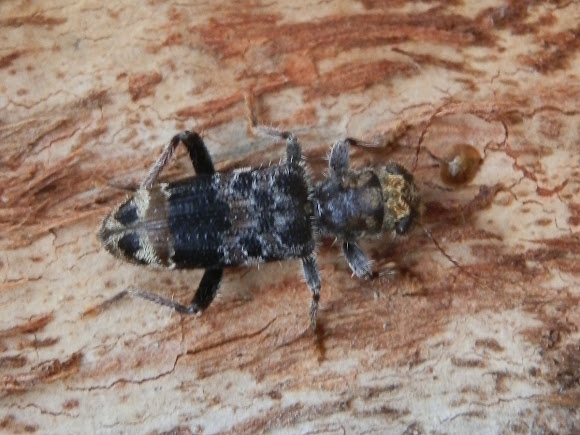 This beetle would have been about 25 mm long with mostly black elytra and thorax. The body was covered with short stiff white setae which gave the beetle a mottled look. The apices of the elytra had bands of brown, white and black. The thorax tapered posteriorly. On the head was a crown shaped ochre-coloured pattern. Eyes appeared large. Antennal segments had bristles all along and ends were feathery. Mouthparts appeared to point downwards.

Spotted under the bark of a eucalyptus tree - ? species.

A very active beetle which tried its best to get away and under undamaged bark. My thanks to bayucca for the ID. http://bie.ala.org.au/species/urn:lsid:b...

Thanks so much Dominik. I believe you're right. Clerid was my first thought but wasn't sure. Thanks again.