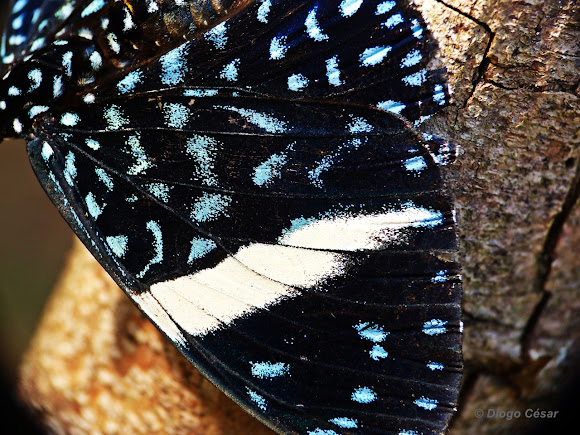 Habitats This species is confined to primary rainforest at altitudes between sea level and about 900 metres. Lifecycle The eggs are white, and laid in chains of up to a dozen, hanging from the underside of leaves. The fully grown larvae are reddish brown with a pale green band along the back and a broad white band above the spiracles. They have short rosetted spines along the back and a pair of longer spines on segments 3 and 10. The head bears a pair of long green horns. The larvae feed on Dalechampia triphylla ( Euphorbiaceae ). The pupa resembles a small withered leaf, and is pale brown in colour with a pair of flattened curly head processes. It is suspended by the cremaster from a leaf or stem. Adult behaviour Hamadryas laodamia is often seen basking on tree trunks, adopting a head-downward posture with the wings flattened against the bark. Males bask in this position for long periods to await potential mates. They commonly settle at a height of about 2m but if disturbed immediately take flight. After a few seconds they resettle, usually higher up on the same tree trunk. They remain there until the threat passes, after which they descend the trunk in a series of short flights, dropping lower each time until after several minutes they resume their original position. The butterflies are active from sunrise to sunset, and are rarely seen away from tree trunks. They feed mainly on decomposing fruit, but as described and illustrated above, they also occasionally settle on the ground to imbibe mineralised moisture, and are also attracted to human sweat.